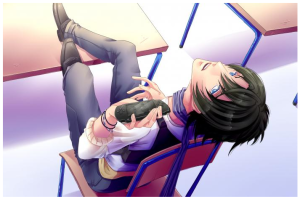 Okay, so after a while, I’m responding to the Daily Prompt again. This time, it’s about obsession. And I have a big one. For several years now. So, basically, I’m a girl that cannot live without slash. Reading it, watching it, whatever, but I need slash, or for those, that don’t understand, I like gay stuff. Especially if the guys are hot and sexy!

I started watching shounen-ai anime in, I think it was my second grade of high school. So I was about 17 at that time. The first I watched was, I think, the anime Gravitation? Or was it not? Seriously, I don’t remember. I watched too many of them at that time. Even hardcore yaoi. And then, it wasn’t enough, because, there were many animes where I started to disagree with the canon couples. And not just animes.

Like… Harry Potter. I just cannot stand Giny. And there are so many guys Harry could be with! Like… Lord Voldemort, Viktor Krum, Rabastan, Bill or Charlie Weasley. So many! And yet, Rowling sticks him with little whory Giny. Nope, don’t like her.

And it’s not just Harry Potter, it’s for example LOTR as well! I mean, Legolas and Aragorn? Who can say no to that?

There are much more. Mainly animes like Bleach, One Piece, Vanguard, what am I watching also? Oh yes, Spiral (watched that at least as many times as it has episodes). Basically, anything that has sexy guys, I go and try to find stories that have the couples I like. Which is mostly non-canon.

This same thing is true with computer games. As well as pure fantasy.

I not only read and watch slash, I also write it. First, it was only original stories, and all in czech, but recently, I got into writing in english and fanfiction. Not that much fanfiction, and it mostly centers around the computer game Legend of Grimrock, but it is slash. And it is fanfiction.

So yeah, that would be what I’m obsessed with. Slash. Can’t imagine living without it. I mean, if I couldn’t read it or write it, fine, I can still at least think it, but if for some reason, I couldn’t even think it, it would be really bad! And I mean bad for those that forbid it!