An anime, to which I came back after a while. Still, the best episode is the one but last. I can’t help it, I like how he kicks that moron’s butt. But I’m getting ahead of myself. The whole idea of this anime, is that there is this new online RPG style game. And, people are trapped in it without any means to log out. The only way to get out is to beat the game, and, technically the creator – Kayaba Akihiko.
The main hero’s name is Kirigaya Kazuto, but his in-game name is Kirito. He was one of the beta testers of the game. And mostly knows what he’s doing.

The anime starts out mild, but gets pretty intense. Especially the first part. In the end, they find a bit of a different way to win – by defeating the one, that didi all of it. And not necessarily on the final floor of the game. Kirito figures out that Kayaba is Heathcliff – the leader of one of the greatest guilds in the game. The fact he figures it out, is really just a fluke, but he does and fights with him, in the end winning. And thus ending the game. 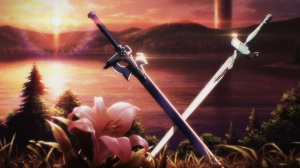 That’s not the end, though. Kirito’s friend – Asuna – is still trapped in virtual reality. How? Let’s just say that there’s this sleazy guy that has the hots for her and took a leaf out of Kayaba’s book. Thus trapping some of the people from SAO in a different game. And so Kirito sets on a quest to free her. And the rest of people that are still trapped. 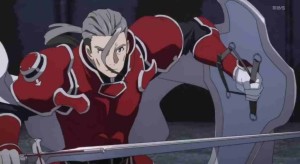 And now we’re getting to the best part. The one but last episode of the second season of this anime. The best part is when Kirito… But…. I just can’t tell you! It would take all the fun away! Just go watch it. I’ll even be nice enough to give you a link to it. Okay?

Okay. This is it. This is all and if you watch the anime, tell me what you think about it? I think it’s pretty good. :)

Edit: No link for you. It appears wordpress doesn’t allow it. If you want that link, write me an email, or something. (A.Elfwind@gmail.com)
Or look it up yourselves, it’s on anilinkz. And that’s one of links that aren’t allowed on wordpress. Heh, as long as it’s not a link, I believe I’m safe.

Or maybe I should say The Elder Scrol IV as that would be the name. A game, I recently reinstalled and started playing again, even though I allready finished about two years back. Or more. I don’t remember. The game is good though. It’s an RPG set in a fantasy world. And that’s the kind of games I like. The basic story is that you have to find a way to defeat a boss, that’s in a different plain of existence. Secondary goal is to protect the heir to the throne. There are also a lot of side quests and when done correctly, they give quite a lot of stuff. I’d go into the details, but where would the fun be in that? 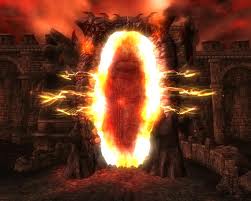 I will tell you two things though. One, if you’re infected with vampirism, go and pray in church. Unless you want to become a vampire yourself. I did once and it’s a pain! Because you cannot exist in the sunlight and timing of the traveling is not possible. And there aren’t always houses nearby that you can hide in.

Two. Don’t start magic guild unles you completed the brotherhood and the thiev’s guild. Or the magic guild will kick you out and I haven’t been able to reenter it, cause the quest to do so is a pain… So this way, you will save yourself some trouble. 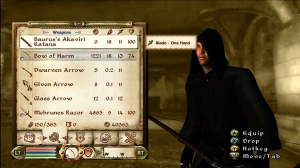 And that’s about it. If you played the game, I’d be interested to read about your experience. If you didn’t, I’d like to know, what you think from reading this. I know it isn’t much, but I’m no good in describing games. At least not without giving up the whole plot line… And I don’t want to do that.

Also, if you can find a way to move the mouse cursor faster, let me know! I’ve been trying to find a way, but it appears there isn’t one.