Another Grimrock Mod, that I’ve finished. Actually, it was a while ago. I just wasn’t feeling like typing it out. Well… I didn’t finish it per se, because, I just don’t know where to get more of the blue gems… Other than Hell, but the problem is that Hell is a trap and you will never bee able to leave it.

Also, Bardel tower are actually two separate mods. Bardel Tower and Bardel Tower II. I’ve got both and once I figure out how to get into certain spaces, I will finish playing it. When a person figures this out I think it can be finished fairly quickly. Still, it is good, has interesting story, false heaven and a lot of traps. Not traps per se, but misleading things, like the hell, heaven, limbo, and so on. I really like this mod and will go back to it at some point. Just not right now. 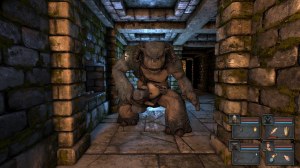 The Tower has several floors. The top one is a cell with a prisoner (you), unless you’re playing the second one and there you start at the bottom, I think. I’m not sure I remember it correctly. But probably yes.

Okay, moving on. This mod can be played with a single member of your party or with full party. Also supports hybrid parties of two or three members. I played with my three people hybrid party and with Toorum. Good play it was.

That’s it from me.